Words have such a stronghold in our lives as do our thoughts. What we think can have a direct affect on the path our lives take. It is important to guard our thoughts. Even more important it is vital to guard our words. As I have stated before our tongues are  double edged swords. They have the ability to build up and tear down. Even if you have never physically hurt or killed someone you have the power to do so through the choice of your words.

Recently, I came across a post that an acquaintance of mines posted on a social media account. It was a generic image perhaps found on pintrest or through a search engine. The post stated “two things I’m good at… being single and overeating”. Innocent enough right? It didn’t ignite strong emotions, the need to comment ” Yes girl!!! Yes!!” nor any other commentary reaction. However it did strike an emotion of sadness for this person. Only so because many of her other posts were about eating in a glutinous manner. As I began to see a trend in similar posts on behalf of this person I thought to myself that perhaps she is feeding into her own demise of self image by feeding her subconscious such thoughts. I could be totally wrong and being far more insightful to what may very well be solely a thread of humorous images grounded on the topic of food and one’s love for food and the comforts of food. However, for the sake of this post I will point out the former. 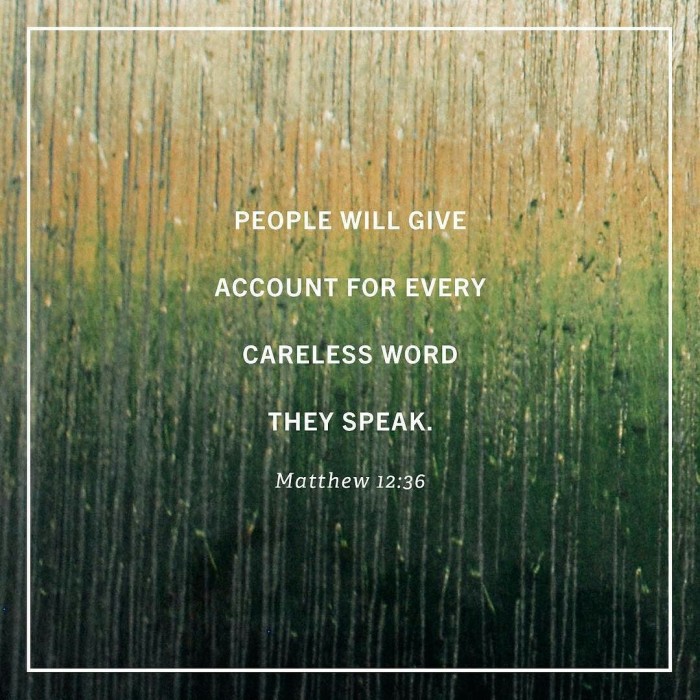 The Lord states clearly in Matthew 12:36 that we will all give account for every careless word we speak. This includes but is not limited to profanities, insults, criticism, gossips, lies, slander, deceit, hate speech, etc. As a beautiful faithful woman my beloved grandmother was known for staying quiet and being “tranquila” never getting involved in other people’s mess or caught up in gossip. Growing up and observing her I would later be able to note, as informed by my mother that because she seldom had commentary to make regarding others or in judgment, that her word held more value when she did actually have something to say. This is because she maintained control over her speech and did not speak out of emotion rather kept her lips closed tightly.

Proverbs 15:2 states “the tongue of the wise uses knowledge rightly,but the mouth of fools pours forth foolishness”. As children of God we are called to a higher standard of living and behaving. However, though we are children of God it does not mean that we are flawless. Far from it. Rather that we should recognize our flaws and allow the holy spirit to work in us. On the topic at hand it is imperative to guard our tongues and exhibit self control. In this sense my mother would always advise me it is better to stay quiet or say “I do not know” or “I have no comment” than to engage in discussions of gossip or negativity. Engaging in such conversations she would say is pretty much engaging in a conversation with the devil because nothing good would come out of it and if anything it would drain you and leave you feeling down.

Ephesians 4:29 reaffirms the power of words and the importance of your words. As young children we are taught that we have one mouth and two ears so we may talk less and listen more. Such a simple concept and yet how valid. Our words have purpose. Our words are meant to be used to praise, glorify and worship but also to build up our brothers and sisters. Though we may experience moments and emotions of rage and anger it is important to not allow those emotions to infiltrate our speech. Another childhood saying, “if you can’t say something nice don’t say nothing at all”. Now this does not mean “don’t stand up for yourself, don’t tell the truth, don’t confront another person that needs to be confronted”. On the contrary. It means when those occasions present themselves, rise above them. Confrontation can and should be handled in a civil respectful manner. It shows class and integrity when an individual can call out or confront another individual without trying to insult the person or degrade them or attempt to make the other feel devalued and worthless. During moments of anger and hurt, betrayal or rage or sadness even, it is wiser to take a moment to truly process the emotions before responding. Our initial reaction is to become defensive and perhaps aggressive even and “give the person a piece of our mind”, but if we are attempting to live proactively then this will not be beneficial in most cases and may even make you feel regretful as to how the situation was handled and how you reacted or presented yourself through your words and your speech.

During a confession with a priest many years ago I confessed about having spoken badly about someone who I did not know, they did not know me but I simply despised them because of ignorance on my part. The priest gave me good advice. Advice that I and maybe you and others need to be reminded of. We need to be gatekeepers of our mouths. Before we speak we should ask ourselves “is it true? Is it helpful? Is it inspiring? Is it necessary? Is it kind?”. To be honest I had forgotten about the acronym and his teaching until years later (more recent) I saw it posted somewhere online. We must T.H.I.N.K. before we speak. This applies in any given conversation. Even in our own internal dialogue. Sometimes, most especially in our own internal dialogue. Are the words we are speaking to ourselves helping to build up our life and provide fruits in our lives or are they toxic and depleting our souls? What we tell ourselves we will believe. What we believe we may end up attracting into our lives. If a person were continously putting another person down and degrading them and insulting them we would consider this behavior abusive and refrain from being  around such a person or in the case of a child keeping them away or in protective custody from such person. However, what about in the case where the abusive person is yourself?

I have heard countless times over and over again a person make statements such as “I’m so stupid, ugh I’m such an idiot or some other insult to belittle themselves”. These statements are toxic as the words themselves carry the power to deconstruct the temple God is trying to build. That temple being you.

Your words are a reflection of yourself. If you are full of anger, pain and resentment typically that is what will be expressed in your speech. People that are full of bitterness, jealousy and insecurities will express that by trying to make another feel inadequate, inferior and devalued.

Fruits of the spirit consist of peace and a calm soul which is expressed in speech that edifys another. Including speech that builds your own worth. Words that speak life into your soul, instead of defeat. Our internal dialogue will direct our steps. This is why in the “new age era” in which we find ourselves in we are constantly being told to think positively and to speak positive affirmations daily. This is because even those who have no belief in the bible will still believe in science, which supports findings based on speaking affirmations into one’s life. (New age, however is of the Occult. More to come on this in future posts.)

Ultimately the one phrase that I think is so powerful is reflected in the bible where Simon Peter responds to Jesus “Lord where shall we go if you have the words of eternal life”. How beautiful, simple and powerful. If the words of the Lord give eternal life then that is clue that by meditating on His words we will better be able to change our internal dialogue. It’s when we change our dialogue to reflect that of the spirit. We build our sense of self through our choice of words through the word of God.